Through this case study, we hope to explore the factors contributing to the longevity of the lifespan of The Southwest Review, a little magazine that has been running for 103 years. The magazine first circulated as The Texas Review in 1915, which was published by Stark Young at the University of Texas, Austin (Hubbell 2). After just two issues, Young left the university, and Doctor Robert Law took over (4). In 1924, the magazine changed hands from Doctor Law to Jay Hubbell, who took the magazine with him to Southern Methodist University (4). In an essay featured in the Winter 1965 volume of the Southwest Review, Hubbell discusses the beginning of the new version of the Review. Hubbell changed the name to The Southwest Review, which reflected his and his associate editors’ desire to reach beyond Texas to a wider circle of both readers and contributors (4).  Hubbell also explained that he and the editors that followed him at The Southwest Review had many of the same ideas and visions for the magazine. He writes, “We [the editors and employees] were a small group of friends and lovers of literature who shared with one another our ideas and our hopes; hence it is difficult to be sure who it was that suggested the series of articles on southwestern cities and on art in the Southwest” (Hubbell 1). Unity and consistency in editorial controls, as well as regional focus and financial support from Southern Methodist University, all contributed to the magazine’s long lifespan.

The 1924 version of The Southwest Review under Hubbell first sought young writers from states in the Southwest region to stimulate readers on the region’s culture. Hubbell, George Bond, and Herbert Gambrell (Hubbell’s associate editors) began reading other little magazines in the hope of finding new and upcoming writers of the century, particularly ones with “something like a national reputation” (Hubbell 7). Henry Nash Smith, an unpaid employee of the Southwest Review, also noted the effects of networking with other little magazine contributors. Smith said that Hubbell and Bond established connections with researchers who were studying the southwestern region such as Mary Austin, Witter Bynner, Willard Johnson and D.H. Lawrence in New Mexico (Smith 300). These connections even led the editors to an interest in southwestern painting, which opened up a platform for critical pieces on the paintings, headed by Mary Austin (300).

Former editor Jay Hubbell attributed the magazine’s unusually long success to “the quality of the materials that [they] could get from writers in our own region” (7). Henry Nash Smith explained in the Fortieth Anniversary volume of the magazine in autumn of 1955 that the content of the Review depended on articles by college professors on the Southwest region, professional writers on the Southwest region, young, promising writers who sought an outlet for creativity (Smith 302). The magazine’s editors and employees recognized that the content likely was one of the driving forces of the lengthy lifespan. In a 1926 volume of the magazine, Hubbell’s associate editor George Bond explained that the magazine would be “definitely Southwestern in tone and content and yet never narrowly provincial” (Hubbell 11). Lon Tinkle, another employee and friend of editor John McGinnis, similarly addressed the Review’s culture: “[The] feeling for the uniqueness, or rathe the authenticity, of a specifically southwestern life-style was not, however, parochial or provincial” (Tinkle 284). The magazine’s employees and editors created a balance between focusing on southwestern regional culture yet allowing an openness to outside influences.

Hubbell, Smith, and Tinkle each separately note that editor John McGinnis was a big aspect of the magazine’s success and longstanding lifespan. The magazine “had an almost continuous and single editorial policy since it moved to Dallas thirty years ago, a single policy administered by only two editors: John H. McGinnis… [and] Allen Maxwell” who was trained personally by McGinnis (Tinkle 284). All three former employees note that McGinnis’ long time at the magazine help it stay afloat in its existence. Nash also noted that McGinnis was relentless in asking contributors for strong work and had a true passion for literature, which was certainly a factor in the magazine’s success (Nash 310).

In a 1926 volume of the Southwest Review, George Bond wrote a passage that explains the culture of the magazine and can help readers understand why the magazine has lasted so long. He writes,

The Review, of course, is not a commercial enterprise; it pays no salaries to its staff; it does not expect to make profits. It owes its existence to the to the exertions of a group deeply interested in the development of this section; and if the magazine is to make the contribution to Southwestern life that it could, that group must be constantly enlarged (Hubbell 15).

What partially drives this magazine is the editors’ passion for the literature of and about the southwestern region. The other driving forces of the magazine’s success are the financial consistency provided by Southern Methodist University and the readers’ continued interest in subscribing to and consuming The Southwest Review.

Click on the cover to browse sample pages of The Southwest Review. 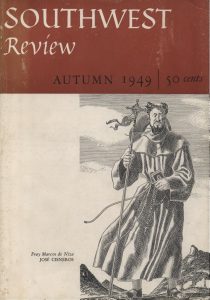 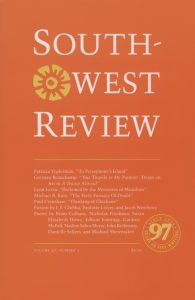